There are a lot of historical anniversaries this year but for a budding journalist none had a more profound effect on me than the lunar landing, other than the death of the man who made it happen, President John F. Kennedy.

I remember the days leading up to July 20, 1969.  We, as a united nation, watched everything the astronauts did with bated breath.  I remember feeling sorry for them that they had to drink yucky Tang and take a bio-break in a bag.  Yet, they opened my eyes to a world of possibilities.  I believed I could engineer the first tourist-carrying rocket to the moon and report on TV when it happened.  Nothing was out of reach now that man could float among the stars.

I had parents who encouraged those dreams and teachers who supported them, but it was still a male-dominated world in math and science.  Journalism was a more realistic goal, and even then, Brenda Starr and Lois Lane were characters in the comics. 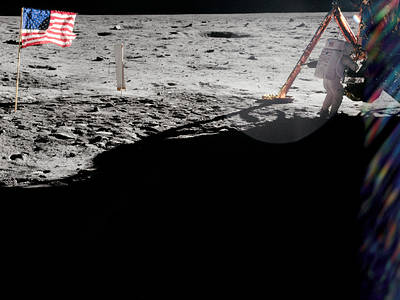 The Apollo 11 astronauts were dream-makers and risk-takers.  The world watched that summer afternoon as the LEM, looking like a toy on a movie set, inched its way toward the lunar surface.  Slowly, we prayed, as a global nation, that they would land safely.  We were taking this in baby steps.  Then, just like that, poof!  The LEM landed, light as air, as if the man in the moon reached out and grabbed the rambling tether to a helium balloon floating among the heavens and pulled it home.

It happened just before four o’clock in the afternoon in New York.  My Dad was at work and called as we watched it together on the phone….that was in the years before FaceTime’s possibilities.  As the astronauts prepared themselves as much as the equipment, for taking that first step onto unknown territory, we waited, and waited, for what seemed like an endless day that stretched into night.

My Mom opened our “Castro convertible” sofa in the living room so we could watch together and fall asleep…just in case.  We sprawled out on our tummies, chins in hand, mouths wide open, too nervous to say a word.  Would aliens greet them when they landed?  None were evident in the grainy video broadcast by NASA.

My family dared not say a word.  We were speechless. Absolutely!  This was way better than Saturday morning with The Jetsons or riding a fake rocket at the World’s Fair.  This was real.  This was on TV.  This was literally out of this world.

Despite the excitement, I know I nodded out because my Mom had to nudge us awake just before eleven that night when Neil Armstrong took one small step for man and one giant leap for mankind.  I had goosebumps. My Mother just smiled.  I declared, there and then, that I wanted to work for NASA and CBS.  Who knew, all those years later that at least one of those dreams would become my reality.

Buzz Aldrin hopped around like a kid on Christmas morning and the world shared his glee.  By midnight, the flag of The United States of America stood proudly in a world where no human had ever gone before.  America was great then.  America will be great again.